K2 Base Camp is considered to be one of the world’s great treks with breathtaking scenery unsurpassed anywhere else in the high mountains. Each Summer in July/ August we organise two treks to K2 Base Camp starting in Islamabad on the same date. K2 Base Camp & Gondogoro La trek requires mountaineering skills to cross this technical pass at 5,560m. Whereas K2 Base Camp & Concordia trek is a high altitude walk where no technical skills are required and you walk back down Baltoro glacier from Concordia.

For a rarely trekked alternative to K2 Base Camp take a look at our Snow Lake & Hispar La trek. Snow Lake area was described by the famous mountaineer explorer Eric Shipton as ’the last blank on the map’. As this region is so remote it serves as the last stronghold for many animal including Himalayan bear, ibex, markhor and the snow leopard. Snow Lake is a high altitude glacial basin over 16km wide located at the head of the Biafo and Hispar glaciers making this system the greatest concentration of glacial ice outside Antartica.

The trekking season for Karakoram is over the summer due to the area not being influenced by the monsoon to the same extent as Nepal and most of India. The optimal months to complete K2 Base Camp and Snow Lake & Hispar La are in July and August.

TRIP STYLE FOR TREKKING IN PAKISTAN

All of our treks in Pakistan are Camping style. This is a fully supported trek where our cooks will cater for all of your meals. We provide group equipment including personal tents, mess tents, kitchen tent and toilet tent. 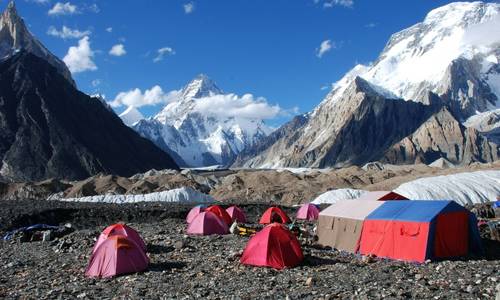 This is a challenging trek requiring technical mountaineering skills, we follow Baltoro glacier to Concordia and K2 Base Camp then cross the Gondogoro La pass at 5,560m 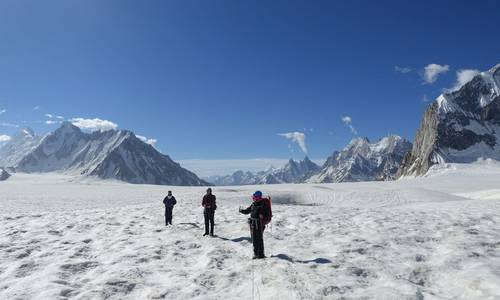 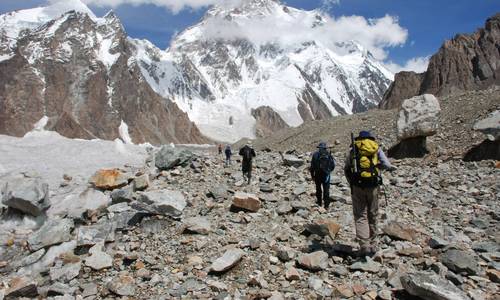 K2 Base Camp and Concordia in Pakistan is one of the world’s great treks. You will see breathtaking scenery of the Karakoram mountains towering over Baltoro glacier.