WALKING AND TREKKING IN LADAKH

Trekking holidays in Ladakh and Zanskar

We offer small group and tailor made walking holidays in Ladakh and Zanskar. This is one of the most remarkable regions of India. Due to its geographic and cultural similarities to Tibet, Ladakh is often called "Little Tibet". Trekking in Ladakh is through a landscape of colorful folded mountains in hues of yellow, red and blue. The land of high passes has deep gorges and high peaks like Stok Kangri (6,153m) and Kang Yatse (6,400m). There are oases of green in the valleys with stands of trees and irrigated fields near the villages.

The best way to explore Ladakh and Zanskar is by joining a hiking holiday. We follow local trails between villages, monasteries and ancient trading paths. In the past the people of Zanskar traded yak products and barley for salt at Tshokar Lake. We follow these ancient paths to Tshokar Lake on our Ladakh Sky Trail GHT trek. The Mountain Company has been operating treks in Ladakh since 2005. Our Managing Director, Roland Hunter, and our Ladakh specialist, Almas Khan, have walked most of the trekking routes. Find out more about us and Our Operations. We are known as one of the best trekking companies operating in Ladakh. We look forward to welcoming you to Leh in the future.

Where is Ladakh located in India?

Ladakh is a Union territory in northern India. Ladakh borders Tibet to the East, China to the North and with Gilgit Baltistan in Pakistan to the West. The Indus river flows near Leh and through Skardu in Gilgit Baltistan. We stay in Skardu for our K2 Base Camp treks. Ladakh is in the Trans Himalayan region north of the main Himalayan range of mountains. It is a high altitude desert with a low level of precipitation.

The largest town is Leh and Kushok Bakula Rimpochee Airport (IATA code is IKL) is nearby. The flight from Delhi to Leh has impressive views of the Himalayas. Leh was an important stopping place on the ancient Silk route from Europe to the East. These days the town has trade from tourists and there are lots of hotels and restaurants. Leh is at an altitude of 3,500m. To help acclimatisation to the high altitude we spend three nights at the start of the trip. This helps your body adapt before the trek.

To the North of Leh is a high pass called Khardung La (5,359m). This is the highest motorable road in the Himalaya and travels into the Nubra valley. Nubra has sand dunes and double humped Bactrian camels. To the north of Nubra valley is the Siachen Glacier. To the North West is Sasser Pass and the famous Karakoram Pass that connects Nubra with Xinjiang in China. During the Silk Route there was trade over this pass through to East Turkestan and Central Asia. To the South-East of Leh is the blue lake of Tso Moriri located on the Changthang plateau at 4,500m.

Zanskar is a sub-district in the Indian union territory of Ladakh and its capital is the small town of Padum. The Zanskar river flows in the valley and joins the Indus river at the confluence downstream. There are several important Buddhist monasteries near Padum including Bardan, Kursha and Phugtal.

What wildlife can be seen in Ladakh and Zanskar?

Ladakh and Zanskar is home to the snow leopard. This is the apex predator preying on blue sheep (Bharal), wild mountain sheep (Argali), Tibetan antelope and Asiatic ibex. Hemis National Park has about 200 snow leopards and this is the highest density in the world. Hemis extends to Ganda La on Markha Valley trek. Other mammals are Tibetan wolf, Tibetan hare, marmot, red fox and the Eurasian brown bear. There are also smaller mammals such as the marmot and mountain weasel.

There are kyangs or Tibetan wild ass in Changthang near Tshokar and Tso Moriri lakes. This area is an important wildlife sanctuary. There are various species of birds such as the black-necked crane. There are birds of prey including the golden eagle and lammergeier vulture. Our Ladakh Sky Trail GHT itinerary finishes after 21 days walking near to these lakes.

Who lives in Ladakh and what is their culture?

Ladakh is sparsely populated by Ladakhi people and is one of the most remote places in India. The culture and history of Ladakh has a strong connection with Tibet. In fact during the tenth century it was a part of the Guge kingdom of Tibet. There are serene Buddhist monasteries known as gompas throughout Ladakh and Zanskar. Many of these gompas are in isolated locations and often perched on rocky hilltops. There are festivals in Winter with masked dances in courtyards of the monasteries. The summer palace of the Dalai Lama called the new Norbulingka is near to Leh.

Ladakhis have a mix of religions including Islam and Hinduism as well as Buddhism. Towards the West into Jammu and Kashmir there are more Muslims than Buddhists. The mountain villagers farm wheat and barley in Summer and tend their yaks. The fields have irrigation from the rivers flowing with snow and ice melt. Apricots dry on roofs of the houses and are stored for use during the cold winter months.

On Changthang plateau near the lakes there are nomadic families called Changpa. The nomads follow a traditional lifestyle raising yaks and Changra goats. The goats produce Cashmere wool used for pashmina. The Changthang plateau extends north into Tibet.

What are the best trekking trails in Ladakh?

There are many trekking routes in Ladakh and we have selected the best trekking trails. Markha Valley in Ladakh is a classic trek and the first one that Roland walked in this region of India. This hiking holiday crosses two high passes, Kongmaru La and Ganda La. From these passes there are spectacular views of Karakoram and Zanskar mountain ranges.

Our Nubra and Shyok Valley trek starts in Nubra. This place is distinctive for sand dunes and bactrian camels. From the summit of Lasermo La pass at 5,400m there are stunning views. We can see the Karakoram, Zanskar and Ladakh mountains. We end the trek at Phyiang and after visiting their monastery we drive back to Leh to complete the circuit.

We no longer organise the Chadar trek in Ladakh during the winter as it is too busy with other groups. With the recent warmer winters the Zanskar river does not always freeze over and it is quite risky walking on the ice.

What is the best remote trek in Ladakh?


Our Ladakh Sky Trail GHT is the best remote trek in Ladakh. We designed this unique trek to explore off the beaten track areas of Ladakh, Zanskar and Changthang. With this Ladakh trek we cross six mountain passes over 5,000m taking 21 days. After Zangla village we cross Cha Cha La pass and descend a remote gorge with many river crossings. The walk goes past Tshokar Lake and finishes near Tso Moriri Lake. View our AITO Traveller Reviews with feedback on Ladakh Sky Trail GHT.

When is the best time to go hiking in Ladakh?


The timing of a trekking holiday in Ladakh is ideal for many people who can only take time off over the Summer. The best weather and conditions are during the months of July and August. This is a different timing compared to other Himalayan countries like Nepal and Bhutan. The peak seasons in these countries are Spring (March and April) and Autumn (October and November).

Ladakh is part of the Trans Himalaya and iis n the rain shadow of the main Himalayan range to the South. This region receives on average 300 days of sunshine every year. There is only small amounts of precipitation even during the monsoon when heavy rain falls on the plains of India. As a result the best hiking season for Ladakh is over the Summer months from mid June to mid September. By June the winter snows are melting off the high mountain passes. During September the temperatures are starting to cool off as Autumn season approaches. The advantage of Ladakh trekking in September is that the river levels are lower. This is due to less volume of snowmelt from the mountains after the hot summer. It is for this reason that our Ladakh Sky Trail GHT takes place from mid August to mid September.

It can be very hot walking in Ladakh during the Summer months with highest temperatures up to 30 Celsius. There is not much shade with trees only found in the river valleys. Make sure you are prepared for the intensity of sun at high altitude by bringing sun hats, Buff scarf and sun cream. Ladakh walking holidays in the Summer have mild overnight temperatures. This is an advantage compared to trekking in Nepal and Bhutan where it can be very cold at nights.

How does a trek in Ladakh compare with trek in Nepal?


Like in the mountains of Nepal, the treks in Ladakh pass through Buddhist areas. You will see colourful prayer flags fluttering on the summit of the high passes. All treks in Ladakh are camping style as there are no teahouse lodges like trekking in Nepal. The peak season for Ladakh trekking is during the Summer months of July and August. Whereas in Nepal the busy seasons are in Spring (March to May) and Autumn (October to early December).

What are the best guidebooks for a trek in Ladakh?

Chat with us about Ladakh! Book a Zoom call with Roland

TRIP STYLE FOR TREKKING IN INDIA

All of our treks in Ladakh are Camping style. This is a fully supported trek where our cooks will cater for all of your meals. We provide group equipment including personal tents, mess tents, kitchen tent and toilet tent. 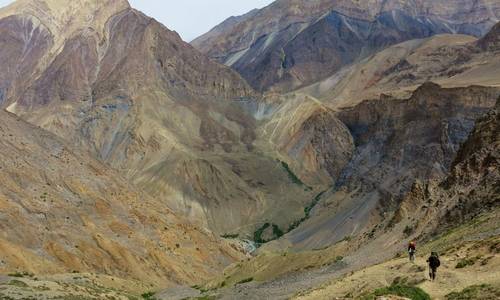 Ladakh Sky Trail GHT is a unique trek designed by us exploring a very remote Himalayan region of northern India. While trekking for three weeks you will travel through Ladakh, Zanskar and Changthang. 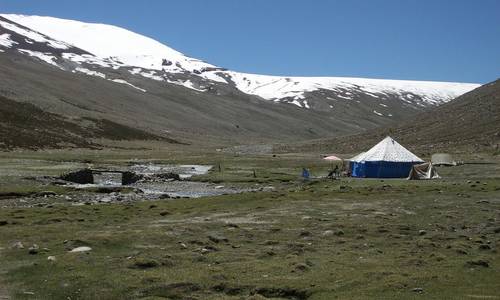 Markha Valley is a trek in Ladakh crossing two high passes with spectacular views of Karakoram and Zanskar mountain ranges. 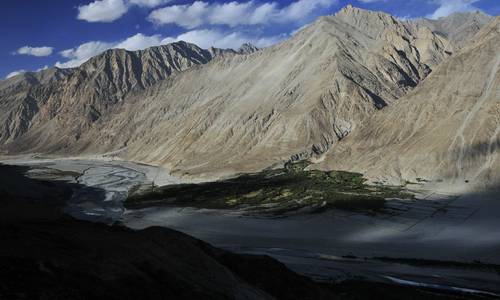 Nubra Valley trek lies to the north of Leh and was once the gateway to the Silk Route. The valley has vast alluvial plains and bactrian camels, which roam the sandy banks of the Shyok River.