When is the best time to go trekking in Nepal Himalaya?

Introduction: When is the best time to trek in Nepal?

Choosing "When to trek in Nepal?" is the second most important question after "Which trek to do in Nepal?". Once you have decided on the right trek for you then the next question is when to go. Selecting the best season will determine the success of your Himalayan trekking holiday.

I have written this article based on my first hand knowledge of trekking in Nepal since my first visit in 1992. I worked as a trek leader for ten years until 2014. Since then I have organised many trekking groups and mountaineering expeditions through The Mountain Company. I live in Kathmandu for four months a year during Spring and Autumn (Fall) trekking seasons. I am in Nepal to help organise and support our groups trekking across the country.

I have read many guidebooks and blogs about the best time to hike in Nepal. Most of these are too generic and do not take into account the range of factors to consider for each trek. In practice the decision about when to trek is more nuanced and complicated. Also I have noticed in recent times that the weather and conditions are changing more significantly season to season. This increased variability makes it more challenging to choose the optimal months. In this Blog article I will use our expertise to scratch beneath the surface to help you select the optimal dates for your trip to Nepal.

Factors for best time to trek in Nepal

There is not only one best trekking season in Nepal as it depends on many factors. As you can see many of these are not weather related. You should consider the following: 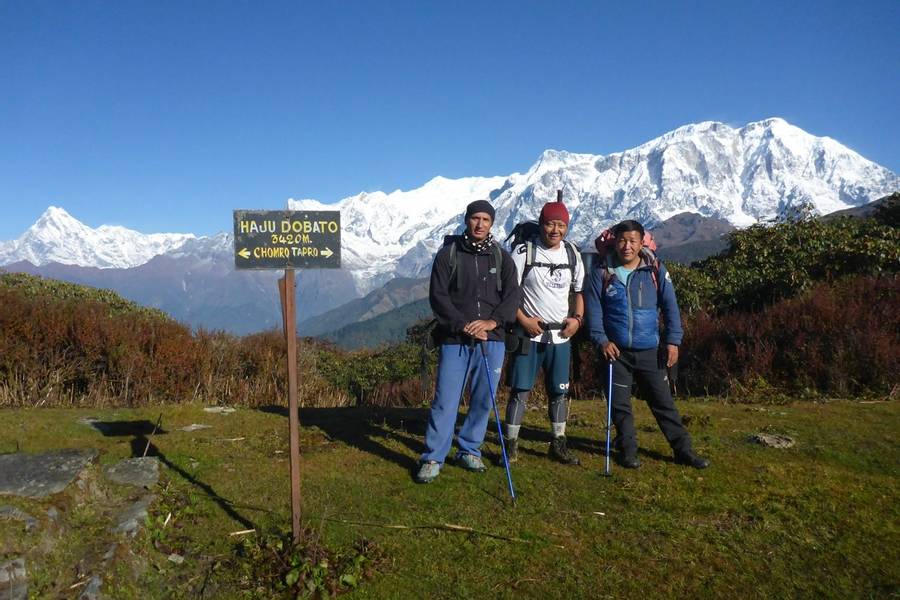 The four seasons in the Nepal Himalayas

Winter: December to February
Spring: March to May
Monsoon: June to September
Autumn: October to November

The duration and severity of the seasons will depend on the location in Nepal and the altitude. At high altitude the winter is longer and snow does not melt until later in the Spring. The length of each season depends year to year and is becoming increasingly unpredictable. For example in the past the monsoon would wind down in mid September. Over the last five years the monsoonal rains have often extended much longer into October.

The monsoon rains approach from the Bay of Bengal and starts first of all in the eastern end of the Himalaya. From there the clouds move across Nepal to the West. As the monsoon recedes during September and October it reverses direction. The monsoonal rains will finish earlier in West Nepal and linger longer in East Nepal. As a result Kanchenjunga and Makalu have higher annual rainfalls compared to other regions of Nepal.

Take a look at Withdrawal of South West Monsoon 2020 map in the image below from Indian Meterological Department. It shows on average the monsoon leaves Far West Nepal on September 30th and Far East Nepal on October 10th. There is variability year to year and as you can see in 2020 the monsoon has been slow in withdrawing from Nepal. On today's date, October 13th 2020, the monsoon is currently in the centre of the country. Whereas in most years by now it would have withdrawn further East into Bangladesh or Bay of Bengal.

There is also less rain from the monsoon further North one goes in Nepal. The rain shadow affects regions in the lee side the Himalayan peaks. The majority of the rain falls as the clouds rise up over the mountains. The rain shadow affects the landscape on the Upper Dolpo to Jomsom GHT trek and Upper Mustang trek. Inner Dolpo and Upper Mustang are on the border with Tibet and are arid due to most of the rain falling on mountainous regions to the South.

By June the monsoon starts its advance again. It moves from the Bay of Bengal and heads westwards through Bhutan into Nepal. Often the onset of monsoon comes in pulses with heavy rain for a few days followed by a dry period. It is possible to trek in West Nepal during June as heavy rain starts there by early July. Whereas the rain will start earlier for the Kanchenjunga and Makalu regions of East Nepal usually at some point in June.

We do not organise any treks during the monsoon in Nepal. There are landslides and rockfall making it risky to drive on roads and for trekking on the trails. There will also be leeches and snakes in the middle hills. Also the clouds obscure the mountain views of the Himalaya!

After the monsoon has departed often a high pressure system settles over the Himalaya region. A blocking high pressure will prevent minor weather systems moving in. This results in sunny weather and bluebird days! The mountain views are at the clearest as the rains have washed out the dust and pollution from the skies. As a result October and November are the most popular months for hiking in Nepal Himalaya. Towards the end of Autumn the temperatures cool off and days shorten. By November it is getting too cold for the mountain expeditions over 6,000m like Mera Peak and Saribung Expedition. It is still possible to cross the high passes over 5,000m. Our groups on Kanchenjunga Circuit have enjoyed excellent conditions trekking in November. The monsoon has finally left East Nepal and by then the days are sunny with blue skies.

It is possible to trek during Winter time in Nepal if you choose the right trek and have warm clothes. December is too cold to cross the high passes over 5,000m and there is a high chance of snow on the trail. Lower altitude treks below 3,000m would be possible. Take a look at Annapurna Luxury Lodge or Kathmandu Valley treks.

During the Spring season the temperatures warm up and winter snows start to melt. By March it is a good time to do treks such as Everest Base Camp and Annapurna Base Camp that do not cross high passes. Whereas Everest High Passes trek crosses over 5,000m so one has to wait until mid to late April for the snow to melt on the passes. April is the best time for most of the circuit treks in Nepal crossing high passes like Dhaulagiri Circuit, Annapurna Circuit and Manaslu Circuit. For some treks in Nepal one has to wait even later such as Upper Dolpo to Jomsom GHT. The Kang La pass at an altitude of 5,380m over to Shey retains the winter snows until mid May.

Weather for trekking regions of Nepal

East Nepal has shorter trekking seasons than West Nepal. This region has an early onset of rain from the monsoon in June and late withdrawal from the first week of October. As we head westwards the monsoon season will be shorter and the trekking season longer. Mid East and Central regions of Nepal from Everest to Dhaulagiri follow the regular trekking seasons of Spring and Autumn. Whereas further to the West in Upper Dolpo the best time is early Summer due to the late onset of the monsoon in July and the late melting of snow on the high passes. If you are trekking in Kanchenjunga or Makalu during March, April and October be prepared for some rainy weather. You may not get rain for the whole day as often the clouds build up in afternoon. After a heavy downpour it is likely to clear again by the evening time.

I have listed the main trekking regions in Nepal starting in the East of the country and moving to the West.

When is the best trekking season in Nepal? Spring or Autumn? 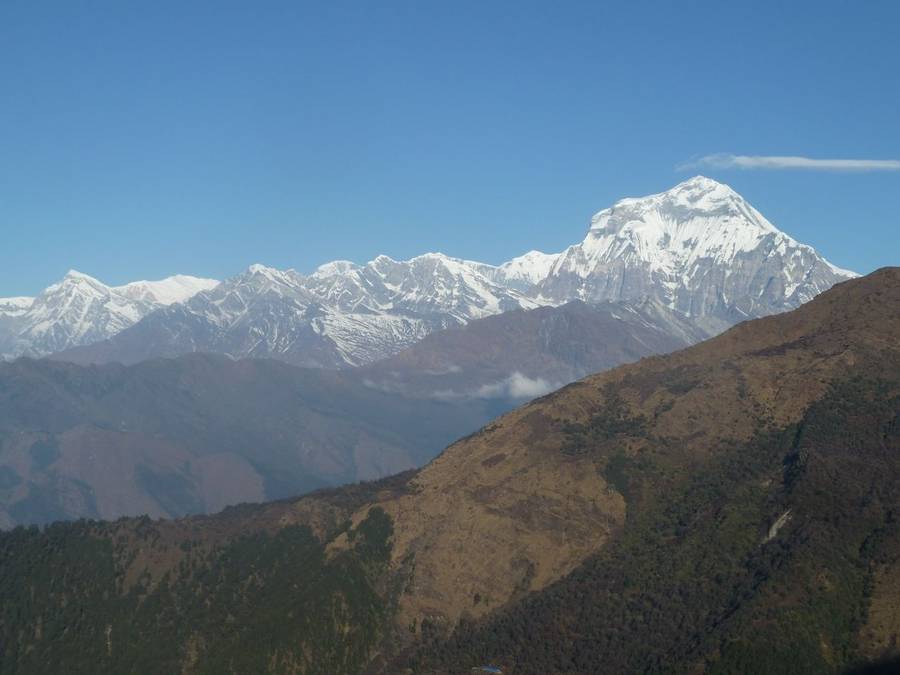 Given these general climatic patterns there is also a high variability of weather in Nepal. As discussed, the peak trekking season in Nepal is October or November. Cyclones can also move into the Himalaya during these months too. It is critical for safety and planning to receive accurate weather forecasts.

When our groups are trekking we pay for forecasts from Michael Fagin at everestweather.com. We check the weather before crossing a high pass or on summit day when climbing Mera Peak or Saribung Peak. There are websites with free forecasts such as Meteo Exploration and BT FreeMeteo. These are helpful although less accurate as most rely on only one forecast model. Whereas a human forecaster like Michael Fagin will review several forecasting models. You also need to have a satellite phone with you on trek to receive the forecasts as most regions do not have mobile phone cover with data to access the internet.

Our conclusion: When is the best time to trek in Nepal?

After all this is adventure travel and so come ready for an adventure! You should always prepare for a range of weather and conditions. This is especially important these days as each season becomes more unpredictable. As Alfred Wainwright said “There's no such thing as bad weather, only unsuitable clothing.” You should make sure you have the right equipment for your chosen trek by checking our kit lists.

As a general rule the best months for hiking weather in Nepal are in the peak seasons of April, October and November. However the exact time of year will depend on the trekking region and the type of trek. As discussed there are also non-weather related factors to consider when choosing the date for your Himalayan trek.

We are a specialist trekking operator and do our best to choose the optimal dates for our group departures. Our decision making is based on our experience built up over the years. At the end of season we review the performance of each of our treks. We will change the dates if it will increase the chance of a more successful trip in the future. We have noticed that by tweaking the dates often by only one week can make a significant difference.

If you have any questions or like further information about trekking in Nepal, please get in touch with us.

Chat with us about trekking in Nepal. Book a Zoom call Now.